PPBA covered itself with glory at the 41st Junior Nationals which concluded in Udupi on the 17th December 2016. As they had done throughout the year, while the boys dominated the Singles events, the girls excelled in the paired events during the Championships. Lakshya Sen, Under 17 singles National Champion in 2015, added the Under 19 singles title to his kitty this year by beating Academy teammate and arch rival Mithun Manjunath 21-15; 21-16 in the final. Lakshya, the Bronze medallist in the Under-19 Singles at the Badminton Asia Junior Championships, did not lose a game during the entire competition.

In another all Academy finals, Kiran George, silver medallist in the Under-17 Singles at the Badminton Asia Under – 17 Junior Championships, won his first National title in the Under-17 Boys Singles by getting the better of Kartikey 21-9, 23-21. Earlier Kiran had shown tremendous fighting qualities while weathering a storm and saving 3 match points in his quarterfinals encounter against another upcoming Academy teammate Maisnam Meiraba.

Ashwini Bhat and Mithula U K defended the two titles they had won in the Junior Nationals last year i.e. the Under 17 and Under 19 girls’ doubles titles. In the Under 17 Girls Doubles, top seeded Ashwini and Mithula had an easy run over 2nd seeded Simran Singhi & Ritika Thaker of Maharashtra 21-13, 21-11 and in Under 19 Girls Doubles the champion pair scored over their Academy counterparts Mahima Aggarwal and Shikha Gautham.

The dream run of Mithula continued when she bettered her runner up finish last year in the Mixed Doubles, winning the title this time in the company of Dhruv Kapila, beating Mahima Aggarwal and Krishnaprasad in a thrilling encounter. Eventhough Mithula/Dhruv lost the first game 18-21, they regrouped themselves to win the next two games 21-15, 21-19 thus making Mithula lift her third title in the Championships. 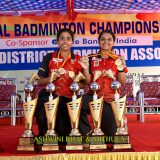 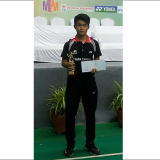 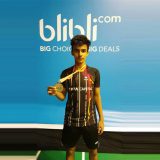 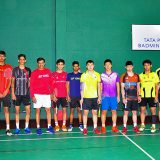